Rhiannon became a volunteer with Barnsley Archives as part of the Cannon Hall Parks for People project, researching the history of the grounds. She found the opportunity through Barnsley CVS supported volunteer programme back in November 2018, since then Rhiannon has been heavily involved in the project which recently culminated in her presenting her findings to over thirty people at the volunteer’s celebration picnic in August 2019.

The volunteer coordinator met Rhiannon at Barnsley Archives and discussed her thoughts on volunteering, what it has meant to her and allowed her to do. Starting off with what drew her to archives volunteering, Rhiannon wasn’t sure it was what she was looking for when it was first suggested but said she knew ‘it was what I was looking for when I got here’, being involved in a variety of tasks that allowed her to both work as part of a team but also on her own as she needed allowed her to expand her comfort zone, socialising with other volunteers, knowing she was in an environment that ‘friendly and safe to reach out in but knowing I could withdraw as well.’

Talking about how the volunteering had gone and what is had helped her do, she felt the time had flown by since November and described herself across that time as feeling more purposeful, ‘not drifting through life’, as she has something to be productive with every week and do something that ‘connects her to the community.’

Rhiannon also said in this time she felt more confident in looking for work, that the regular coming and doing things had built her ability to apply skills which boosted her confidence when applying for jobs.

Overall volunteering has had a ‘strong positive impact on life’ and Rhiannon hopes to be able to continue after the project and if she finds work.

Staff have also seen this progression, Gill Nixon from Archives who coordinated the project said ‘it’s amazing to see such a change, I am so proud of her.’

‘When I first met Rhiannon, she seemed a bit unsure about her future and what she could do. She had done a degree in Classics and didn’t really know how she could use that in any way.

Her initial 16 week goal was ‘to become confident with structured volunteering’. At the end of the 16 weeks when asked how the programme had helped her, she said, ‘The Volunteering Coordinator found me an absolutely perfect opportunity and supported me in getting started’. The only thing that would stop her continuing was ‘a random meteor strike!’

I saw Rhiannon’s confidence increase greatly as she volunteered and she excitedly shared stories of what she had discovered in the letters and journals from Cannon Hall.  It was so good to see how the support given by Archives in addition to a role that interested her, had led to her feeling she was doing something purposeful.

Rhiannon’s positive experience encouraged me to refer other volunteers who also have an interest in history to the Archives department.’

If you would like to take part in the Parks for People project at Cannon Hall, you can apply here. 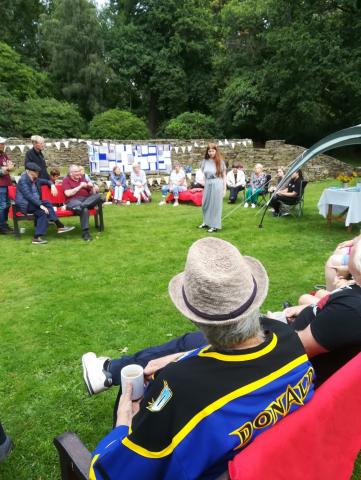